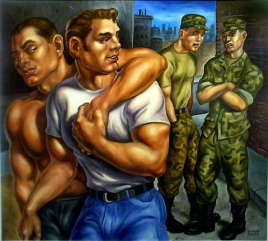 For Turkish military’s point of view, openly gay men in the army would cause “disciplinary problems” and would be impractical creating the need for “separate facilities, separate dormitories, showers, training areas”.

The Turkish military openly discriminates against what they deem as passive and effeminate gays by barring them from serving in the military. Active and masculine appearing gays and bisexuals are able to serve in the Turkish military.

Many gays also conceal their sexual orientation to avoid the humiliation of having to prove it. According to the official commentary to the army’s health regulation, for a homosexual to be exempted from service, “documentary evidence must prove that the defects in sexual behavior are obvious and would create problems when revealed in a military context.”

To seek exemption, therefore, many gay men have to endure pseudo-scientific tests designed to appraise both their homosexuality and the extent to which it might render them “unfit” for service. “Parts of the test I took included having to draw a picture of a tree, a house, and a person,” says S. “You’re given a lot of crayons, and then you have to answer why you drew things the way you did.” Other gay conscripts report having been asked whether they liked playing with dolls as children or enjoyed wearing women’s clothing.

A new discipline regulation draft for the Turkish Armed Forces reveals a new guise for an old practice against gays in military posts. A new military code will label homosexuality as an “unnatural imminence” in the military body’s draft. It will join other ‘behaviours’ worthy of discharge including murder, fraud, bribery, and serving a prison sentence of more than a year.

Homosexuality will now be clearly listed as ‘unnatural occurrence’ in Turkey’s army regulations. LGBT rights groups have sharply criticized the new planned change, labelling it discriminatory and a violation of human rights. They further stated that people’s sexuality has nothing to do with their ability to perform military duties.

Ali Erol from KaosGL, an Ankara-based LGBT association, told the Hürriyet Daily News yesterday the practice was not new apart from its wording. Noting a fundamental contradiction in the military attitude against homosexuality as a whole, Erol said the army practiced a dual policy.

Before this regulation, Turkey’s military doesn’t just discriminate against gays — it humiliates them. And now, they also discriminate gays in a very repulsive way!

This is the trailer of the documentary “ÇÜRÜK-THE PINK REPORT” directed by Ulrike Böhnisch. Throughout the documentary, three or four homosexual guys tell us what they thin or have experienced about/during the mandatory military service in Turkey.

*This piece  is a collage of the articles in BBC News, Gay Star News.com, ForeignPolicy.com, Hürriyet Daily News.com and PinkNews.co.uk.