There have been some hate crimes and homophobe’s giving speeches (as usual) but 2014 was a good year for Turkish LGBTs.

A gay wedding ceremony forced public to confront the “gay fact”, beauty pageant and fashion show for trans people were held, some municipialties act upon LGBT rights, first gay lifestyle magazine was out

At the beginning of September 2014, Ekin Keser and Emrullah Yavuz, a gay couple ties the knot in landmark gay wedding in İstanbul.This wedding was obligatory theatrical, because gay weddings are not legal in Turkey but nevertheless it was a happy, sentimental wedding.The couple  claimed that, they believe one day they will have the same rights with heterosexual people.Ekin and Emrullah’s wedding ceremony was in a boat over Bosphorus İstanbul on September 2nd, with bunch of their friends and some family members. Media could not miss this news and the society was shocked with this celebration.

A transsexual news reporter Michelle Demischevich was fired from her job due to her attitude and outward appearance, so the news channel (IMC TV) that fired her claimed.  Nearly 10 trans were dead hate murders and some of them were suffered from malicious injuries, extortion and abuses.

But also there were good news for them: First trans beauty pageant took place even though some activists objected as this pageant’s being “heterosexist”. The backstage photos of this pageant was published on reputable news agencies abroad. Yankı Bayramoğlu, a 23-year-old model has won the contest and also went to Thailand to attend Miss International Queen, a worldwide trans beauty contest.

Also, first trans-gay fashion show hit the runway with the leadership of Oyku Ay who said she was inspired by a woman who told her that transsexuals could showcase dresses better than traditional models.

Charles F. Hunter, U.S. Consul General in Istanbul will reportedly marry his boyfriend, Ramadan Caysever, a Turkish musician, according to reports in the Turkish media.Bülent Cankurt, an entertainment reporter for Daily Sabah, claims in an article that Hunter, who has served as U.S. Consul General in the Turkish city since 2013, will marry Ramadan Çaysever, a musician, in a civil union ceremony in the United States in late December. Cankurt said the diplomat and Çaysever first met in a ceremony at Istanbul’s Crimean Memorial Church, where Çaysever was performing a concert, and the two developed a relationship.

On 29th June, 2014 the LGBTI Pride March of Turkey was held with nearly 100.000 people. LGBT people’s were more respected after Gezi protests so many people supported their Pride March. This march was held in the middle of the Istanbul city, Taksim-Istiklal Street and brought great attention to the LGBTI individuals.

Two biggest municipalites of Istanbul city (Besiktas and Sisli) supported LGBT people in 2014. Besiktas Municipality, who have also signed the LGBT-friendly-municipality protocol before the elections, placed  some ads on the billboards  for the “hate crime day” to remember the trans people who were killed or injured. Sisli Municipality Mayor Mr.Hayri Inonu has supported his openly-gay principal clerk/activist Boysan Yakar. Also this municipality has opened a LGBT-friendly health care desk.

Political parties as CHP and HDP has supported LGBT individuals with some press conferences about hate crimes that was held in  Turkish Parliament, some statements and also social media messages. 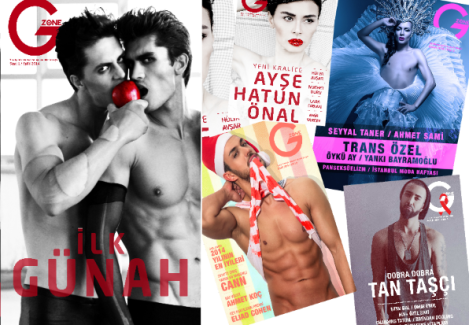 GAYS OF TURKEY Network Partner and Turkey’s first gay life style magazine G ZONE Magazine published (online for now) in Turkey. G ZONE’s first issue was s launched with the hashtag #TürkiyeBunaHazır, meaning #TurkeyIsReadyForThis, referring to the notorious question that has been asked by homophobes opposed to gay marriage :Is Turkey ready for this?

G ZONE’s all issues and the latest news from Turkey’s gay life is here on www.gzone.com.tr